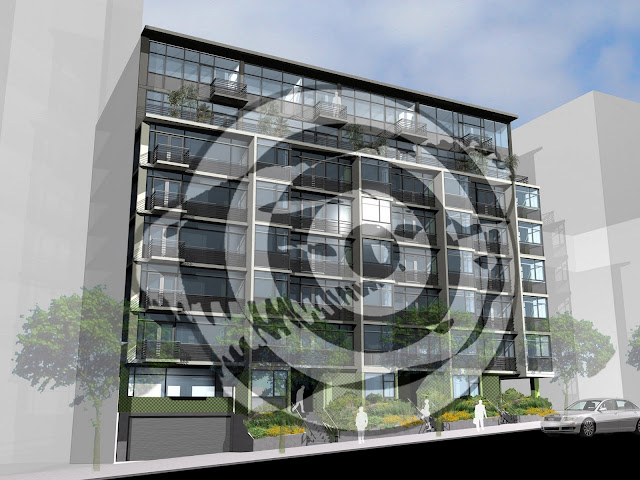 Congratulations to Traci & Cole for finding Dinosaur #30!
Traci posted another synopsis of the hunt on her blog, but since it's not nearly as long as her previous post, I will post it here:
Yesterday I caught my second dinosaur. It was an unexpected find: When the first clue to the dino’s whereabouts was posted on Tuesday, May 31, I was out of town, three hours east back home in Angels Camp. In fact, I’m at my friend Barbara’s bon voyage party when my mother, who has recently become as fascinated by dinosaur hunting as I am, calls and in an excited voice tells me, “I know you’re here, but there’s another clue posted and I figured it out! It’s at 333 Fremont Street! It’s an empty lot; there was supposed to be a big building project there a few years ago but it was abandoned! 333 Fremont Street!”
I text my friends in the Bay Area, hoping that one of them would capitalize on my mother’s genius, but both of them say they’re busy that day, and I give up hope of finding a second dinosaur. Instead, I play Settlers of Catan, eat, drink, be merry, and let all thoughts of dinosaur hunting go.
Yesterday, however, I come back to San Francisco, and I’m supposed to meet Cole for a movie at the Landmark Theatre Embarcadero Center. I’m in a skirt and heels. I have none of the proper attire or equipment for dinosaur hunting except for my wits, my phone, and whatever pens or scraps of paper I can dig out of my purse. Still, I hike from the Embarcadero BART station down Fremont Street hoping to find that vacant lot.
I call my mom: “Where’s this thing supposed to be? There are like three different construction projects going on on Fremont Street!”
She repeats the address to me and I hike another block down Fremont to Harrison Street, where, as she had said, there’s an enormous vacant lot, and attached to the chain link fence, a clue: 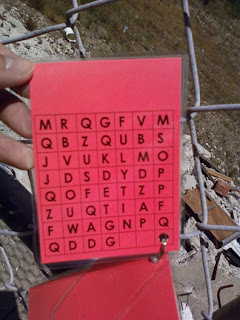 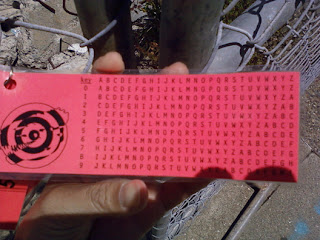 There are three sheets of laminated hot-pink paper: One with a grid of letters, one with what seems like a key to a code, and one with the date of the day that the first clue had been posted, 5/31/2011. I snap photos with my camera phone and scribble down the grid and the key on the back of a crossword and a stray bookmark, and while I send them to Cole and my mother, I head back down Fremont to a café where I can sit and puzzle the thing out while waiting for Cole.

I call my mom, who’s at work, and because she can’t receive images through text messages, proceed to recite everything to her: “The fourth row is jester, dog, see-saw, dog, yodel, dog, Peter Pan!” But she’s at work and after half an hour of Googling can’t help me figure it out.

Let’s fast-forward a few hours: I wrack my brains for an hour and a half trying to figure out how to decode the grid. Cole is late to the movies so we miss the showing. We dejectedly head back home, where we look up all sorts of ciphers and codes on the internet, where we find information that should be helpful, but isn’t. The ten alphabets on the key seem to shift one letter every time, making it seem like a Caesar cipher, and the whole array like atabula recta. But why the numbers? Were we supposed to turn the grid into a series of numbers, which we could also have to decode?

Fast forward again: We’ve eaten dinner. We’ve eaten dessert. We’ve watched the Giants play ten innings against the Cardinals. We’ve seen them come from behind twice. And then Cole asks me what was written on the third piece of paper.

“Maybe the top row is five,” he says, pointing, “and then the second row is three…”

“Maybe…” I say. But while he decodes in rows, I begin decoding in columns. There are, after all, seven columns, and seven numbers in that date. The first column, which I suspect corresponds to the alphabet on row five of the key, doesn’t give me any Xs or Qs, so I have hope. The second, which corresponds to row three, doesn’t either. A Z shows up in the third, row one, and I start to feel like maybe we’re never going to figure this clue out, but I persevere, because if this isn’t it then I’m going to make damn sure it isn’t. By the fourth column, row two on the key, I’ve spelled “HOPE” across the top line and I know I’m on to something. “It’s in columns!” I tell Cole. “Do the last two! They’re both on row one!”

While I finish the fourth column and the fifth, Cole quickly decodes the last letters and reads them off to me, and here’s what we get: 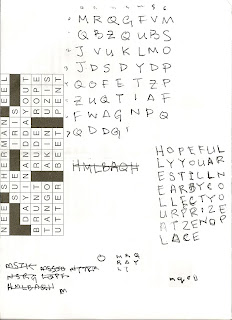 HOPEFULLY YOU ARE STILL NEARBY COLLECT YOUR PRIZE AT ZENO PLACE
Nearby? We’re in the Outer Sunset, as close to the beach as you can get, and Zeno Place, we discover, is around the corner from Fremont and Folsom, all the way back across the city, near the bay. But we’ve spent hours trying to figure out this puzzle. And at ten o’clock, as the Giants head into the top of the 11th inning against St. Louis, we grab the dog and the camera, hop in the car, and head out in search of that elusive dinosaur.

We get to Zeno Place half an hour later there it is. The dino sticker and the plastic-wrapped package we were sure someone would get before us.

Everyone, meet Hutch the Heavy Dinosaur.  He's a triceratops! 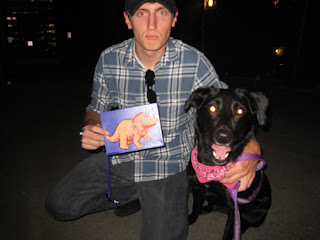 We have to thank my mother, who gave us the location of the second clue, the internet, and AdamD for doing such an amazing job arranging the dino hunt. We’re making a concession, however: Although we love dinosaur hunting and solving puzzles, we’ve got to bow out for the next ten rounds. There are only 70 dinosaurs left now and we want other people to share the thrill of dinosaur hunting! (Please don’t leave one un-hunted for a week, though, because then we might not be able to help ourselves!) Go get 'em, world! There's dinos to be hunted! 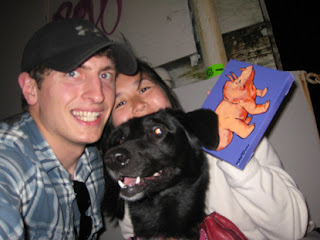