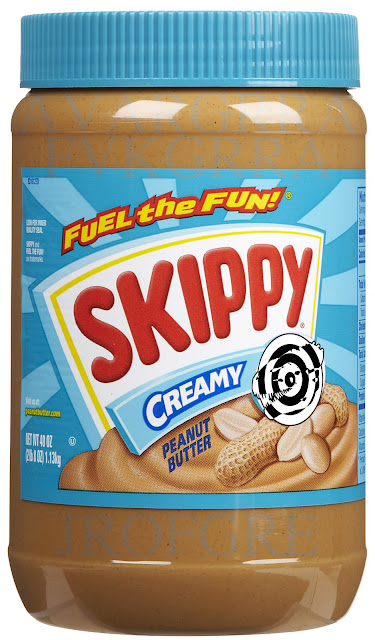 *This is a long hunt with a lot of clues leading to five different paintings. The paintings are all hidden in different locations. PLEASE do not remove the clues, EXCEPT for when you come to a clue later in the hunt. Without giving too much away, its something round. Please email me or tweet at me if you find a clue has been removed or destroyed: xadamdx(at)gmail(dot)com / @XAdamDX

This clue leads to the starting point, 1916 Webster St in Alameda. I originally had the clue leading to 1913, but before I even had a chance to fix it someone had found one of the paintings, so I guess it didn't effect the odds too much. The original Skippy manufacturing plant was at this location, and now all that remains is a small, easy to overlook plaque. On the back of the plaque I left directions: 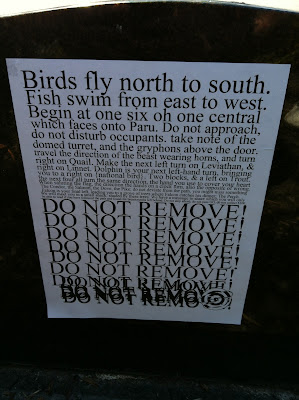 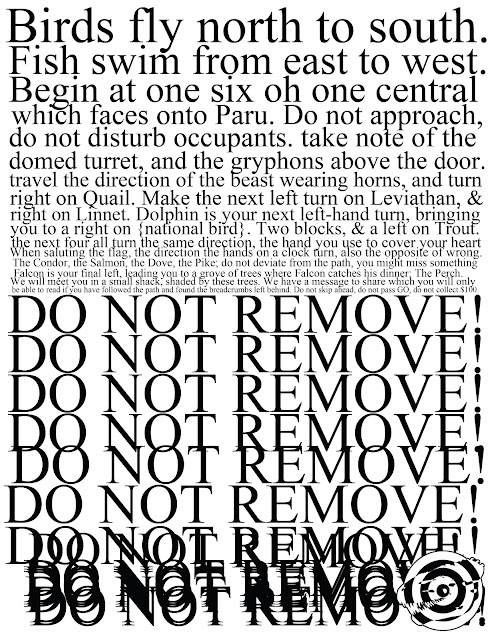 If I was a billionaire, I would live in the house located at 1601 Central (which faces onto Paru) and I wouldn't change a thing about it. From the domed turret and the gryphons over the doors, to the weird orange paint job, it's such a cool looking house. 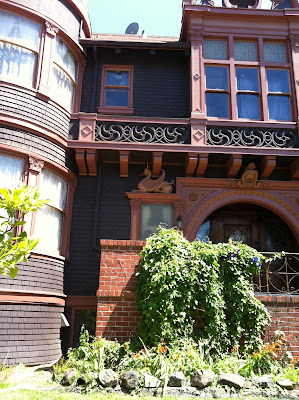 The directions from here led hunters through an old section of Alameda. The street names have all been changed, but the North-South streets used to be all named for birds, and the West-East streets were all named for fish: 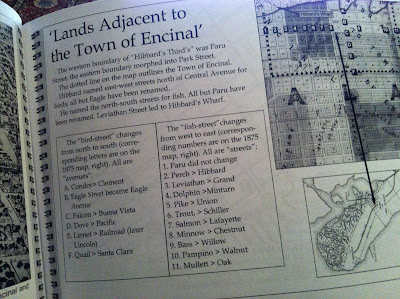 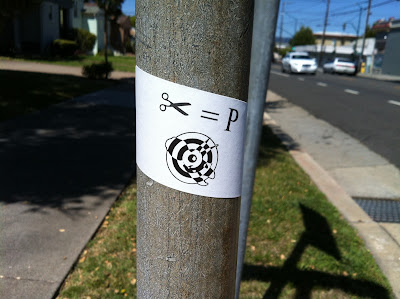 Nearly everyone found themselves turned around toward the end, thinking they needed to head into the marina instead of down Buena Vista. I wound up having to give a little bit of help to help get people beyond this point, which meant checking my emails and twitter a lot this weekend. (That's the toll of trying to set these things up as a new parent on limited sleep. Try your hardest and wind up messing things up. ahh well.)

Also, several people didn't realize exactly how small the shack would be: 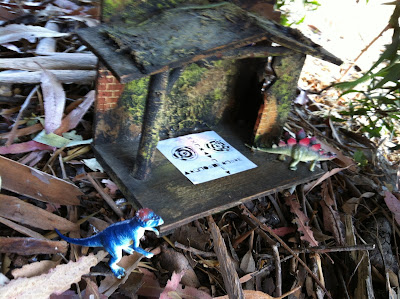 On the roof of the shack was a pterodactyl, and if you arrived in the dark, you would have found ominous glowing lights shining down onto the clue, a substitution cypher. Even if you didn't find all of the bread crumbs on the way here, it was still solvable. The clues just made it easier. 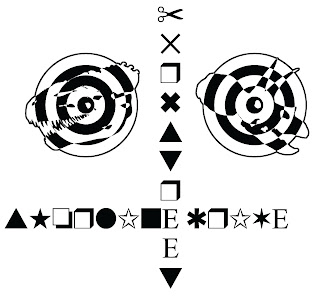 This decoded to SHORELINE DRIVE across, and PARK STREET vertically.
Arriving at this intersection, taped to the bottom of a pole, was a phone number: (510)522-9901
Hunters who called this number found that no one answered, but a payphone nearby started to ring! Inside of the phone book clam shell case, was another substitution cypher: 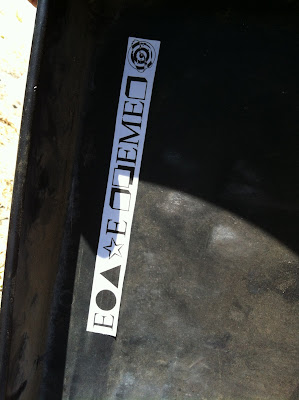 This decodes to ELSIEROEMER.
Elsie Roemer has a bird sanctuary nearby, about a block from the payphone. 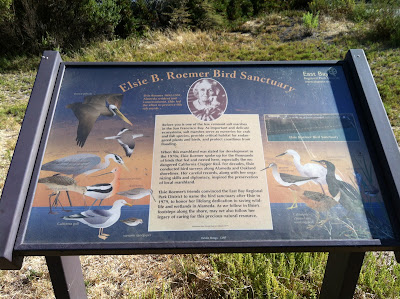 On a small pier that juts out into the sanctuary, I made a small nest, and I filled that nest with dinosaur eggs! (this was the "round" item I eluded to at the beginning) 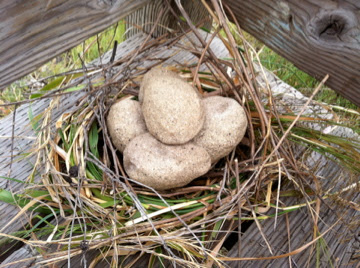 Each of the eggs had a small plastic dinosaur inside, and attached to that dinosaur was a small strip of paper, giving the location of a painting. These were the locations where I hid paintings #86-90: 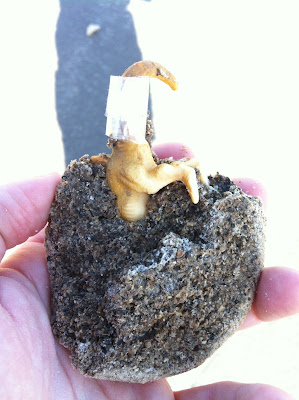 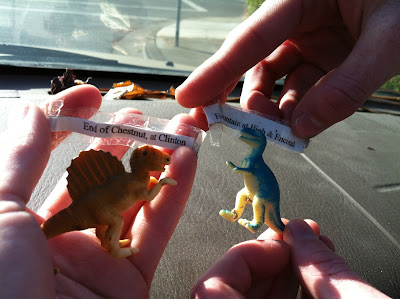 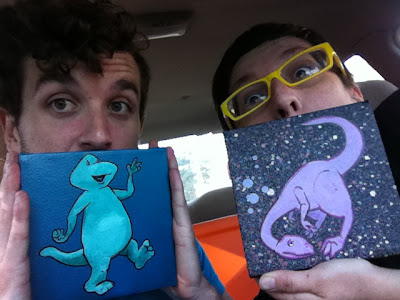 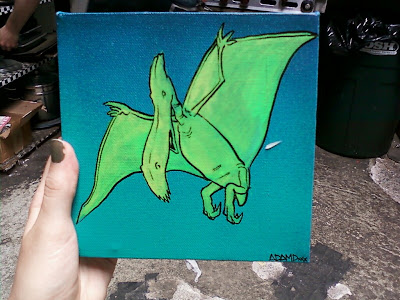 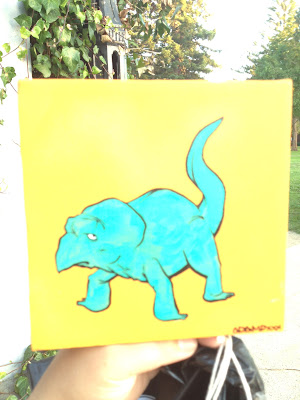 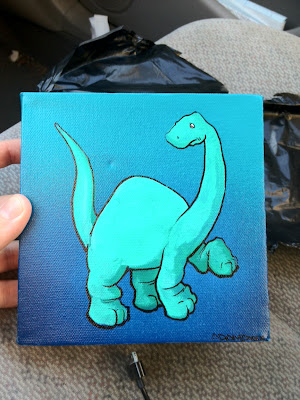 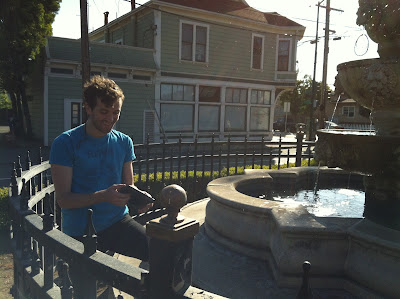 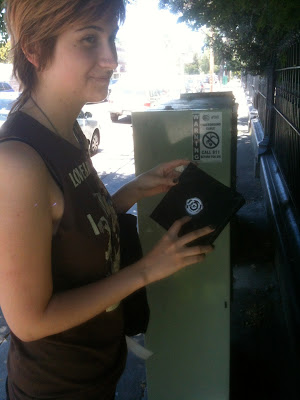 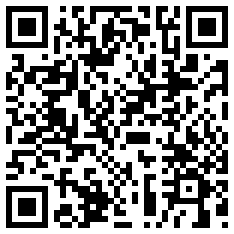