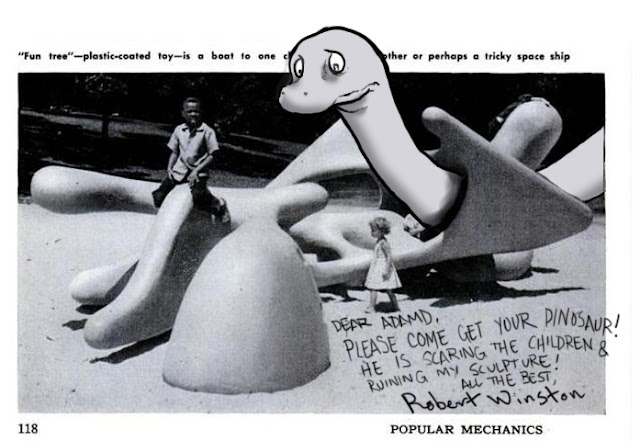 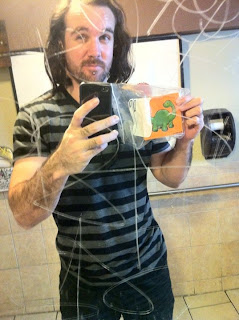 Congratulations to Uriah Findley for tracking down Dinosaur #3!
Here's a rundown of the hunt:
Upon arrival at the Play Sculpture, located near Fairyland, there was a note left inside of the tunnel the dinosaur's neck was protruding through. It read:
Robert,

I’ve been trying to get ahold of you all week! This brontasaurus is really making it hard of the band to play! I can keep it locked up under here for a few more days, but then I’m going to have to find somewhere with more space to keep it. Your friend had better come pick up this dinosaur soon!
-James P. Edoff
This then lead to the nearby James P. Edoff Memorial Bandstand, a nearby gazebo. down a few steps to the locked gate beneath, another note:
Dear James,
Now, you know I’m glad to help, but I really need to make the hall available to the public! Keeping a dinosaur in here is NOT what I had in mind! I already have enough problems with the satanists stealing the address numbers off the building every other day! Please see to it that your friend picks up this dinosaur by Friday, or I will need to find another place where he will have more room!
Regards,
Marsha Jean Corprew
Up the hill a bit lies the Lakeside Park Garden Center, Marsha J. Corprew Memorial (the address is 666 Bellevue Avenue, the numbers whether removed by vandals or the estate of Marsha Corprew, I'm not sure...) Behind the plaque commemorating the life of Mrs. Corprew, there was another note:
Hiya Marsha,
I can keep the dinosaur over here, there’s plenty of room, and it’ll be like we’re keeping his on a leash near a huge water dish (haha). He’s a good fella, big! Hopefully, if he gets hungry he can just eat the leaves off the tree. Otherwise, I’d worry about the restaurants nearby!
See Ya Later, Alligator!
John E. McElroy
Across the lawn bowling courts behind the garden center, lies the McElroy Fountain. Inside of the fountain on a pipe was the following illustration and caption:
﻿ ﻿
Standing up in the fountain, clearly visable across the street is a taqueria called Los Cantaros. Inside the men's room, there is a tiny toilet next to a regular sized toilet, and inside the toilet tank (which was marked with a dino-target), placed inside a ziploc bag, was the painting!

I had a lot of fun setting up the clues for this excursion. In the future though, DO NOT REMOVE THE CLUES! Uriah pulled the first note down after finding it, so anyone who showed up after he did could not follow it to the other clues! So, the only thing you should be removing from these locations are the dinosaur paintings I leave behind. Cool? Cool.
Posted by AdamD at 12:00 PM