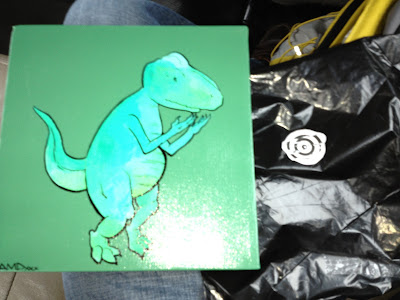 Here's what Jim had to say about the hunt:

I've been tracking the dino hunt for some time now. Sometimes I got really close (I think). When you posted Clue #92, I printed out the puzzle and looked it at on my commute home. Someone next to me asked what I was doing and I explained to him that there are no additional clues so everything you need to figure out the puzzle is on the page. I started at the star and figured out the chicken sandwich clue and immediately knew you were referring to Bakesale Bettys. I've been falling in line for chicken sandwiches for years! Five hours later I visited Bakesale Betty's and found the old man clue. 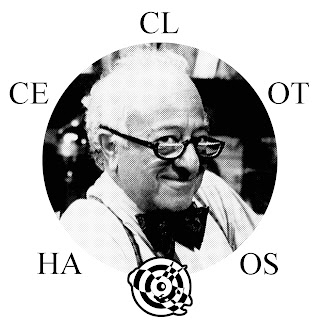 I took a picture then worked on it this morning on my commute to work. I unscrambled it and made the connection to Hoopers right as Bart pulled into MacArthur station and impulsively decided to jump off then take a taxi to find the next clue.
A woman watering the lawn at Hoopers asked what I was looking for when I found the Hooper clue. (the clue was "The Kanadian khamp, Khris Eyres of New Westminster, BC, ate 18 in 12 minutes in 2001.") I read it out loud and she said, "well, I know a hot dog contest takes about 12 minutes." The things people know! So I asked her if there are any hot dog places in the area and she said "Sure, there's Kasper's across the street but its closed" All the while I'm explaining to the cab driver what I'm doing so when we arrived at Kasper's he jumped out of the car too. I found painting #92 then feeling victorious I asked the driver to take me to work.

I'm so glad to finally get one. My 4 year old son will be so thrilled to add the T-Rex to his wall.
Posted by AdamD at 10:15 PM