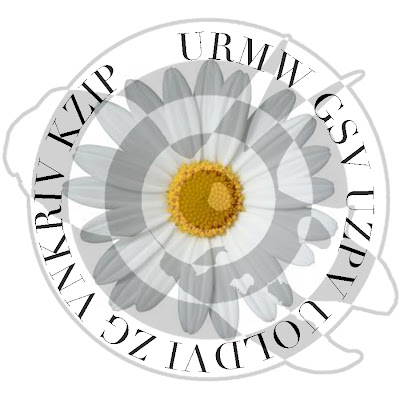 Congratulations to Eric Forsberg! He not only was the person who found this painting, but he was also the person who let me know the clue I placed had been removed. 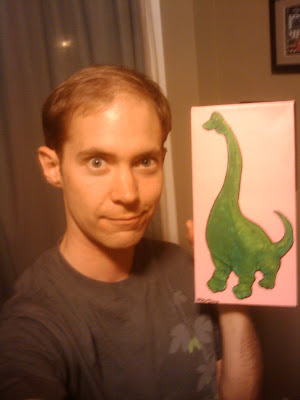 Here's a write up from Eric about the hunt:

So after a month of checking the dinoblog every day I had almost given up hope on a new post, but apparently my persistence paid off as I jumped on that clue as soon as it popped up this morning.  Of course I was also at work when it happened so I had to find a discreet way of solving the clue.  I opened up excel as soon as I saw the clue, because as an accountant that's what I use to solve most problems.  After playing around with a few combinations of alphabet rearranging I got the "Find the fake flower at empire park" and excused myself for an early lunch.  Since I work downtown it wasn't much of a trek so I headed to Empire Park in China Town and snooped around for some sort of fake flower. 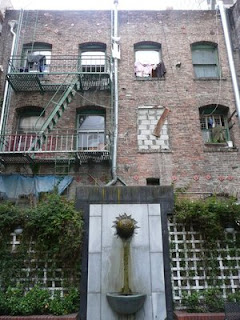 As soon as I got there I noticed there were a couple gardeners cleaning up, but otherwise empty.  I spent about 15 minutes fondling bushes and looking under benches, but the only "fake flower" I was able to find was the fountain in the back with no sign of any clues nearby.  I gave up and headed back to the office.  Once there I sent an email to Adam asking if perhaps the clue was removed.  He got back to me right away and said he'd check it out.  Some time went by and I was informed that yes, it was gone, but it would be replaced and since I spent so much time there I'd get the clue via email.  "PLAQUE runs in "The Family" "keep young".

(let me interject here that the clue was a fake daisy with a tag attached to the stem with this typed onto it. When Eric mentioned the gardeners, I knew it had been removed, since I had planted it in one of the planter boxes to look like an actual flower. I replaced it with some labels with the same phrase printed on them, along with a picture of a flower and the dino-symbol)

After looking busy at work for another hour or two I spent a little time googling the clue words and finally came up with a wikipedia article on "The Family" club in SF.  Turns out they have a location downtown on Powell St so I ducked out of the office a few minutes early and hiked over to this club.  I think I spent about 30 mins combing the street looking for either a clue or the 'plaque' that was referred to before finally giving up, a second time, and barting home.


Once home, I began chatting with my fellow scavenger hunter and girlfriend Mary who sent me a link to a site showing a picture of a plaque about "The Family" I had not spotted.  Apparently this plaque was on the same street as the first clue and marked where "The Family" had begun it's fancy schmancy mens-only club.  With this new found knowledge I quickly boarded the bart again and headed to the spot.  I sighed once I got there because, like the gardeners for the first clue, there were men with power washers cleaning the sidewalk in front of the plaque.
Luckily though they weren't working on the street around the corner, because tucked in to a tight little crevice was a small package wrapped in black plastic.

Eric actually missed two clues in that area that led to the gap, but still found the painting! Pretty cool! If anyone wants to find those clues, I will send the first person who uncovers them (by sending photo evidence) an illustration of a dinosaur!